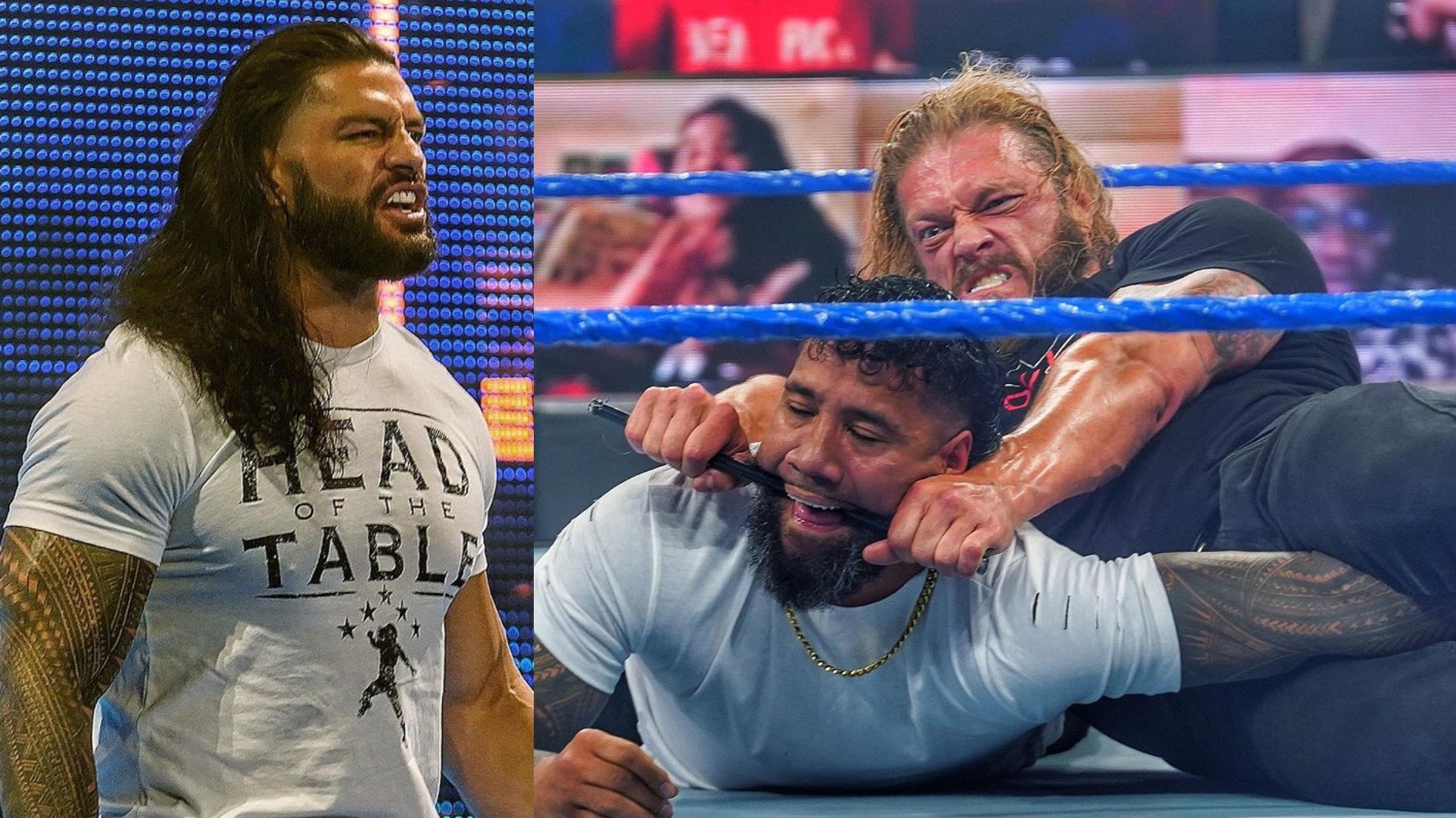 Smackdown Savior Seth Rollins and Superman Cesaro are going to come face to face once again this Friday.  But this time there will be a qualifying match for Money in the Bank

King Nakamura vs Baron Corbin (qualifiers for Money in the Bank)

Another qualifier will be seen in SmackDown.  Actually, King Nakamura will face Baron Corbin.  Both the superstars have given tremendous matches in the past and they have faced many times in SmackDown.  Corbin had lost his crown against Nakamura a few weeks ago.

Roman Reigns didn’t appear on last week’s episode of SmackDown.  Despite this, now his return can be seen in SmackDown.  Jimmy Uso was badly hurt by Edge last week and Roman was not a part of the show. Because of this, he could not take revenge from Edge.  Well, now he may be back in SmackDown.

Backstage:- Jimmy Uso attempted to meet his cousin Roman Reigns, but Paul Heyman stopped him and said that Reigns would speak to him himself.

WWE SmackDown was started by Universal Champion Roman Reigns and as soon as he arrived, he targeted Edge and said that he is a huge liar.  Reigns revealed that whatever happened at WrestleMania, he eventually pinned and retained his title.

He then said that he was not prepared for what happened two weeks ago, as his focus was on his family.  Jimmy Uso entered and said that Roman Reigns was having a holiday.  Responding to this, Rance said that he was completing Jimmy Uso’s work and then Jay Uso’s music played and he returned.

Roman Reigns finally managed to get his brothers on one page.  The three brothers were seen hugging in the ring.

Baron Corbin came to the ring without entrance music and in the meantime Big E was also seen.  He called commentator Pat McAfee on his special couch and started commentating.

After this, it was shown on the screen that Nakamura and Boogs entered Corbin’s car itself.  Corbin attacked him before the match started and then the match started.  It was a good fight and both the superstars showed their mettle in the ring.

Corbin and Nakamura both used tremendous moves in the ring, but in the end Nakamura struck a kinshasa to win as well as qualify for the MITB match.

Natalia and Tamina vs Shotji and Knox

Shotji and Knox made their WWE main roster debuts from NXT and are challenging the Women’s Tag Team Champions in a non-title match.

This match did not last long, in which both the teams got their chances.  However, in the end, Shotji applied his finisher to Natalia and pinned it to register a surprise victory for his team. Knox and Shotji looked overjoyed after the match, so the Women’s Tag Team Champions couldn’t believe their defeat.

Backstage:- Edge was interviewed and asked about the Roman Reigns-The Usos reunion.  Edge said he would answer it in the ring and as a spoiler it was not going to be a happy reunion.

Sonya Deville gave an update about Bailey and told that she is out for a long time.  Meanwhile, the Devil announced that there will no longer be a SmackDown Women’s Championship match at Money in the Bank, but Bianca Blair will be defending her title against Carmella next week.

Meanwhile, Liv Morgan once again showed her anger and at the same time accused the Devil.  However, Devil’s anger erupted and he replaced Carmella with Liv Morgan in the MITB match.  After this Bianca Blair also came out and hyped her match.

Who will replace the injured @itsBayleyWWE and become @BiancaBelairWWE‘s next challenger? We find out NEXT on #SmackDown! @SonyaDevilleWWE

“I hope you win the title next week, because when I win #MITB…I’m cashing in on YOU!” @YaOnlyLivvOnce to @CarmellaWWE #SmackDown pic.twitter.com/7mYsOOnI37

WWE SmackDown saw a very awesome match between Cesaro and Seth Rollins.  During the match, both the superstars fully showed their abilities and once again gave a memorable match to the fans.

There was a moment in the match when the turnbuckle opened and Cesaro’s head collided with it and he was also badly bleeding.  In the end, it was Seth Rollins’ advantage and he won the match via pin and qualified for the MITB ladder match.

The Usos tried to attack Edge’s locker room, but there was no one in their room.  The Usos were disappointed and their plan failed.

Seth Rollins was celebrating his victory backstage and he was also interviewed.  Rollins made huge claims for the future as well as talked about Roman Reigns’ match.  However, in the meantime, Edge came and confronted Rollins.

Edge came to the main event of WWE SmackDown and targeted Roman Reigns and challenged him to the ring.  Roman Reigns forbade his brothers to enter the ring.  Reigns himself came out, but later The Usos also came out.

A brawl broke out between Roman Reigns and Edge. Meanwhile, the Mysterio family has returned and attacked The Usos. On the one hand, Edge made Roman Reigns bad in the ring, then the Usos tried to save him.

However, the Mysterio family put the Usos 619. After this, Edge, with the help of Mysterio, made The Usos in a very bad condition by giving them a cross face.  Roman Reigns kept watching his brother’s condition from the stage and looked completely helpless.

With this the episode of WWE SmackDown came to an end.