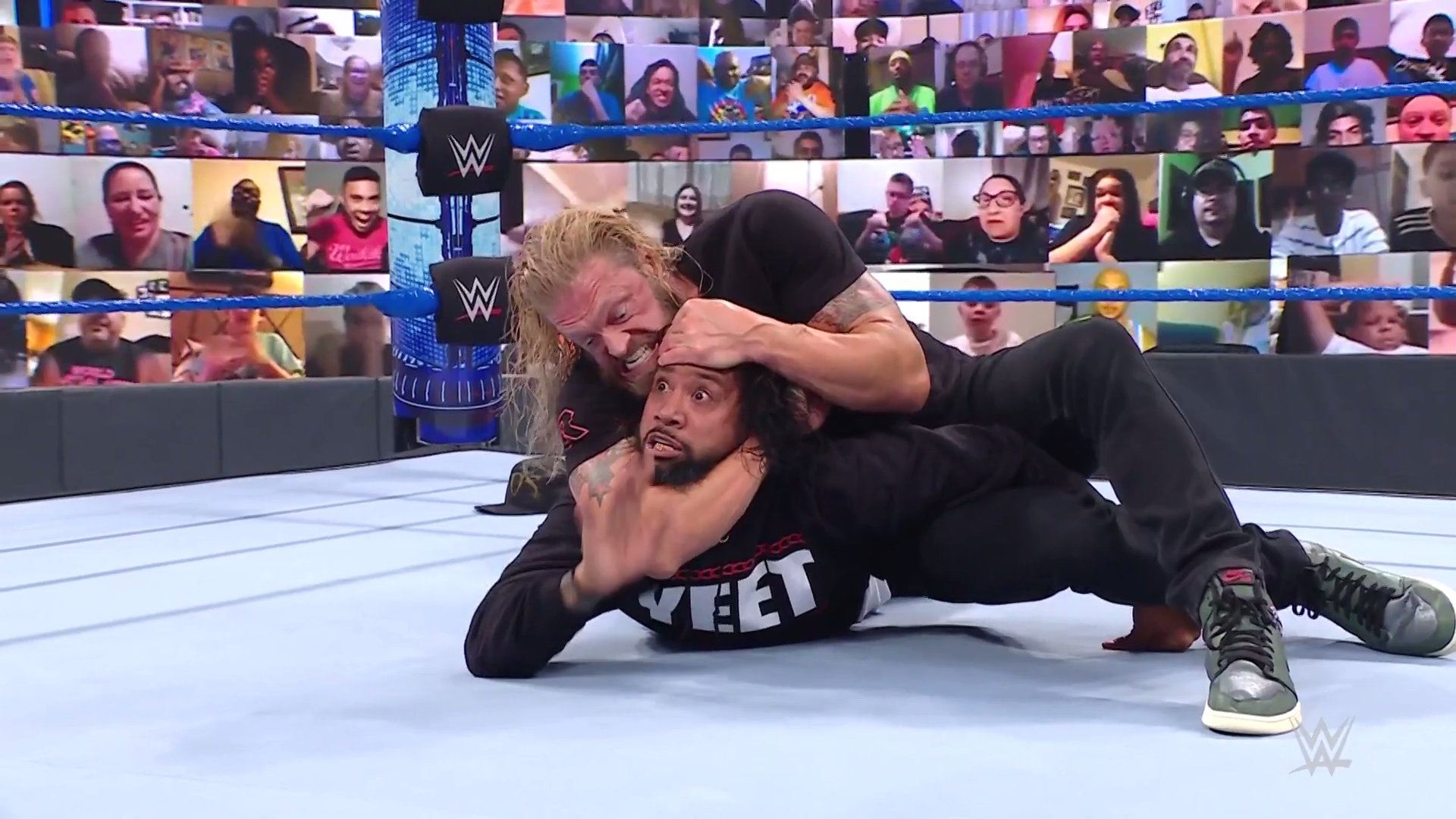 wwe has already announced some segment and matches which we are going to watch next.

So backstage in the last smackdown episode, Adam Pierce and Sonia Deville announced the last man standing match of sami zayn vs kevin Owens. And winer of this match qualifier will come for Money in the Bank men’s ladder match.

Last Week Rated R Superstar Edge made his comeback attacking head of the table Roman Reigns. Roman Reigns will try his best to take revenge for Edge’s attack.  Maybe this week we will get to see Edge vs Jai Uso i a match.

Adam Pierce and Sonia Deville told Seth Rollins that wee would think about it after the Roman Reigns segment, but in the main event, Edge came back and attacked Roman Reigns for Roman Reigns vs Edge for the upcoming mitb ppv Match confirmed.

On this match, Seth Rollins can be seen giving his reaction on the upcoming SmackDown show.

Last week’s WWE SmackDown video package showed the way Edge attacked Roman Reigns and the match between them was made official.

WWE Hall of Famer Age introduces SmackDown.  He talked about WrestleMania and said how he could not complete the circle of 10 years.
Edge also mentioned to Daniel Bryan how he was hurt because of him.  After this, Edge targeted Roman Reigns and said that he can defeat Roman Reigns.
Edge also said that even Roman knows this, but he will never accept it.  Edge said that he defeated Roman Reigns several times in WM and would also beat Tribal Chief at Money in the Bank.

Since winning the King of the Ring crown, Nakamura has all the momentum and is enjoying the moment.  In SmackDown, he teamed up with Big E and fought a good match against Apollo Cruz and Baron Corbin.

Although Corbin regained control at one point in the match, the boogs distracted him and the screen showed his car being towed.  Big E then put his finisher on Corbin to register a win for his team. After losing the match, Corbin looked completely disheartened and desperate in the ring.

Former SmackDown Women’s Champion Bayley pinned defending champion Bianca Blair last week. Bayley then spoke about her victory and said that she would still beat Blair even after the return of the live fans.

After this Bianca Blair also came out and told how many times she has defeated Bailey this year.  Blair then challenged Bayley to an I Quit match.  Bayley accepted the challenge and said that if she lost she would leave SmackDown, WWE.

“@BiancaBelairWWE is CLEARLY crumbling at the weight of your expectations.” – @itsBayleyWWE #SmackDown pic.twitter.com/fSVX6cSYrH

Backstage:- Jimmy Uso told Paul Heyman that he was going to challenge Edge to a match in the main event of SmackDown and beat Rated R Superstar.

SmackDown saw a Last Man Standing match for a place in the Money in the Bank ladder match between Kevin Owens and Sami Zayn.  Once again both the superstars impressed a lot.  During the match, the use of tremendous moves was seen, but at the same time the weapon was also used well outside the ring.

Zayn has on several occasions tried to keep Owens down for a 10 count, but he was unsuccessful.  In the end, Owens first gave a powerbomb to Zayn in the ring and then a stunner.  After this, Jane is given a powerbomb first on the announcers table, then on the table and finally on the apron.  With this, Jane could not even get up for the 10 count and Owens won the match.

Owens has also qualified for the MITB match along with Big E, Drew McIntyre, Ricochet, Riddle and John Morrison.

WWE Official Sonya Deville has announced the name of the second women’s superstar to take part in the MITB ladder match from SmackDown.  The Devil included Gelina Vega in this match and with this, Gelina Vega has once again returned to WWE. Vega claimed her victory and meanwhile Liv Morgan came and protested the Devil’s decision once again.  Morgan also took aim at Vega and slapped her hard.

The match between Gelina Vega and Liv Morgan did not last long, but according to the storyline, the match was quite good.  In the end, Liv Morgan continued her momentum by registering another tremendous win.

Backstage:- Seth Rollins expressed disappointment over Adam Pearce and Sonya Deville not getting a match against Roman Reigns.  However, Sonya Deville offered Rollins a MITB match to win that contract.  The Devil announced the MITB qualifying match between Rollins and Cesaro for next week.

Otis faced Angelo Dawkins in a singles match.  Otis once again dominated this match.  In the end, easily defeated one half of former Tag Team Champions Dawkins via pinfall from Otis.

Jimmy Uso entered the ring for the main event of WWE SmackDown and insulted Edge by calling him into the ring. Edge also came out and while targeting Roman Reigns, he also insulted Jimmy Uso.

Edge attacked Jimmy Uso and hit him at the ring post. Jimmy Uso also made a tremendous kick to Edge.  Jimmy Uso attacked Edge, but Edge soon made a comeback and caught Jimmy Uso in the cross face. Jimmy Uso tapped out.

“Main Event” Jimmy @WWEUsos vows to call out @EdgeRatedR NEXT on #SmackDown!

With this also the end of WWE SmackDown.